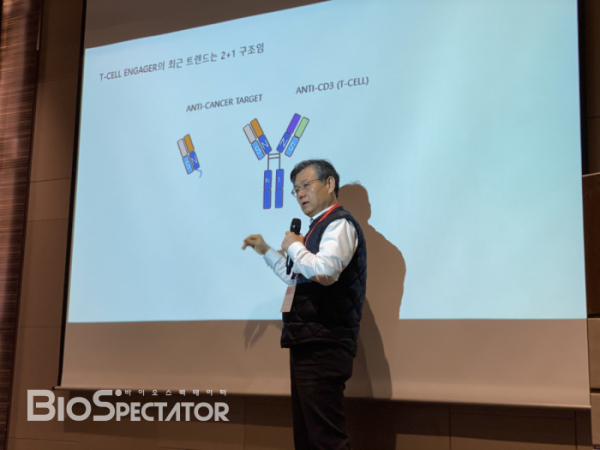 The first domestic anti-PD-1 antibody candidate is about to enter the domestic Phase 1 clinical trial. Although 'IMC-001', an anti-PD-L1 antibody developed by IMMUNEONCIA, is now under the domestic Phase 1 clinical trial, 'YBL-006', an anti-PD-L1 antibody developed by Y-Biologics, has the same level of anti-cancer effect as 'Keytruda' by Merck and 'Opdivo' by BMS but uses a different binding site to PD-1.

Y-Biologics, established in 2007, is dedicated to R&D efforts using its self-developed human antibody library 'Ymax-ABL' under two strategies: the development of candidate substances to be administered in combination with anti-PD-1 antibody and the development of a T-cell bispecific ALiCE treatment drug. Y-Biologics plans to enter a domestic clinical trial for anti-PD-1 antibody and to go public on the KOSDAQ.

In addition, the company aims to complete the pre-clinical trial by 2021and facilitate global technology transfer during the pre-clinical trial phase of YBL-013 (ACE-05), a bispecific antibody using the ALiCE platform under development by Y-Biologics to target CD-3 and PD-1. The ALiCE bispecific antibody is a general Y-shaped IgG-type bispecific antibody with the '2+1' type binding capacity consisting of Fab, which targets two cancer antigens, and CD3 Fv, which targets T cell, and which exhibits anti-cancer effects and reduced toxicity. Y-Biologics confirmed that cancer cells in model animals administered with ACE-05 were removed more effectively than other drugs. Vice President Park added, "In the end, it all comes down to toxicity. Whether the candidate substance is evaluated as an effective drug depends on how it can minimize side effects by controlling toxicity."

Y-Biologics has concluded ten cases of joint development contracts and two cases of technology transfer contracts since 2016. The company aims to discover and develop self-developed candidate substances in a continuous way and to transfer technology based on its own human antibody library.

Vice President Park said, "Let me take Zymeworks for an example, which is a Canadian bispecific antibody developing company. Zymeworks has transferred bispecific antibody pipeline technologies to big pharmaceutical companies including Merck, Lilly, Celgene, and GSK from 2011 to 2018, and recorded the milestone payments of 116 million dollars from technology transfer in 2018. The remaining milestone payments are estimated at around 6.525 million dollars."

PREV
Pascal, Y-biologics to collaborate in bispecific antibodies for leukemia 2019.11.06